Because witchcraft, Wicca, and paganism are so closely tied together, there’s often some confusion about what separates each or whether they’re separate things at all. The narrow spectrum of pop culture references doesn’t do much to dispel this confusion!

Now, we could probably go on and on about each topic. There are centuries of history and a broad range of beliefs to cover, but we’ll give this brief overview our best shot.

So What Exactly is Paganism?

The dictionary defines a pagan as:

1. One of a people or community observing a polytheistic religion, as the ancient Romans and Greeks.

2. A member of a religious, spiritual, or cultural community based on the worship of nature or the earth; a neopagan.

Though there’s some debate on the origin of the word pagan, many etymologists believe that it comes from the Latin paganus, meaning “villager or non-combatant.” Typically, people from these rural villages held non-Christian beliefs; overtime this term, once Roman military jargon, became synonymous with those who “worshipped false gods.”

So you see, paganism is not a specific faith but is an umbrella term for many faiths. Some of these include:

Which brings us to…

What is a Wiccan?

Quite simply, a Wiccan is one who follows the Wicca religion (also known as “The Craft”), an earth-centered religion originated by Gerald Brosseau Gardner (1884-1964) in the 1940s in the U.K. Its belief system is built around the pre-Christian traditions of Ireland, Scotland, and Wales. In the 1960s and 1970s, Wicca began to spread to other countries, but it wasn’t until 1985 that the U.S. government officially recognized Wicca as a religion.

Wicca is a ditheistic religion, recognizing the God and Goddess, and thus falls under the umbrella of paganism. Today, Wicca has many offshoots with different belief sets, some are slightly different and others deviate quite a bit from the original architecture. A perfect example is the open embrace of Wicca in the feminist community who, as a result, place more emphasis on Goddess-worship.

Some of these Wiccan subsets include:

Now here’s where things can get a bit murky for those standing the outside looking in.

Witchcraft is the practice of controlling or focusing energies to cause a desired change and a witch is, you guessed it, someone who practices witchcraft.

While many believe that anyone who practices witchcraft may call themself a witch, there are those that believe it to be more involved. This usually involves an in-depth study of and induction into the craft.

So There You Have It!

Okay, we’ve covered a lot of ground in a very brief amount of time. Here are the main takeaways:

Of course, your spiritual path and choice to practice or not practice witchcraft are deeply personal. Ultimately, we at Blessed Be Magick  hold that as long as you bring harm to none, no path is inherently wrong.

Photo by Paige Cody on Unsplash

Thank you for the information! I am a beginning witch, and I am studying up on a lot of things, so this is helpful!

Thank you so much! This articke really helped because i am beginning to practice witchcraft. I want to learn as much as possible before doing any magic so i dont mess anything up. Thank for this helpful info!

thank you for the info i cannot wait to learn more

Velvety soft and lovely violet color, perfect little box for storing or taking all my witch jewelry wherever I go,

Simple and beautiful ring that came in a stunning box. I've been wearing it constantly since it came in and i feel odd when i don't have it on. I WILL be buying from here again. ~ bright blessings 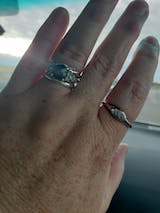